Will Eisner famously used the term sequential art to describe comics. But isn’t film also sequential? Scott McCloud talks about how film is similar if you look at the film itself, and not when it is projected and played. Film is just a series of images, a comic in slow motion if you will. McCloud notes that the difference between comics and film is the way in which individual images are juxtaposed. The comic is far more voluntary than film is. You are forced to see frame after frame while watching film but with a comic, your eyes can wander. But more importantly, with film, the way in which the images are juxtaposed with one another is through time, the chronology of the images as they get projected onto the screen, one after the other. However, with comics, it is space that juxtaposes one panel with the next.

Did you ever wonder if there was a term for the tiny margin of empty space between panels? No? Well I am going to tell you anyways. It is called the gutter. Not the most appealing name for such an important aspect of comics.

But why am I telling you all this? Why am I stressing the importance of space in comics? Well that is because I ran into one this summer that utilized it in a way that I had never seen before.

Asterios Polyp is a comic written and drawn by David Mazzucchelli. Basically it is a coming of age story about a famed fifty-year-old architect named Asterios Polyp as he seeks self-discovery. To me, it is so very important that he is an architect.

Now there are many things to talk about when considering this comic. It’s dense, both in its written content and its visuals. But I want to focus on one mechanic the comic uses over and over again.

At the beginning of each “chapter”, if you will, is not the name of a chapter, but a single  panel that is directly in the center of the page. What is so special about this panel is that, first of all, it is not sequential, and second, the content within the panel is itself isolated elements. Let me provide an example of when this is used.

The very first page, we see inside the lone panel, raindrops – individual raindrops. From this we can assume that it is either raining, or we are possibly looking at drops of water on a window. In a way, the specificity of the image itself is defeated by the fact that it resides in a panel that is isolated from any other visuals. But that is not entirely true, for you can never forget about the white space that surrounds the panel. May I remind you, when you only have one panel on a page, there is a lot of white space. But all that space is directionless and aimless. But Mazzucchelli provides direction in the next page.

We then turn the page over and we see two panels now. One shows the raincloud that is precipitating, then the next one shows that it is raining on a city. We get even more context on the next page where we see a lightning bolt crash to the city below from the rainclouds perspective. Basically, Mazzucchelli keeps zeroing in on the subject at hand, page by page, till we realize that the lightning bolt hit Asterios’ apartment causing it to catch on fire. In the span of six pages, we go from the isolated specificity of the raindrops to the contextual specificity stating that this is where Asterios Polyp lives.

What I think is so genius about the use of that very first panel is that it shows how space can operate at a fundamental level. An element can occupy one space in a vacuum but the next page expands our understanding of that very space by showing how even the most isolated of elements are a part of a greater picture, a greater space.

In the next chapter, Mazzucchelli uses this to show a well-groomed Asterios with a cigarette then proceeds to show the sad, unshaven, and wet face of Asterios right after his apartment caught fire. He uses this over and over again. How fitting for a story about an architect. One that can design all these empty buildings while he himself has nobody to share his space with.
Mazzucchelli uses it once to show a grid of apples that are all drawn differently, only to go to the next page to show various people that are drawn differently, with the narration saying, “What if reality (as perceived) were simply an extension of the self?” This is one of my favorites. 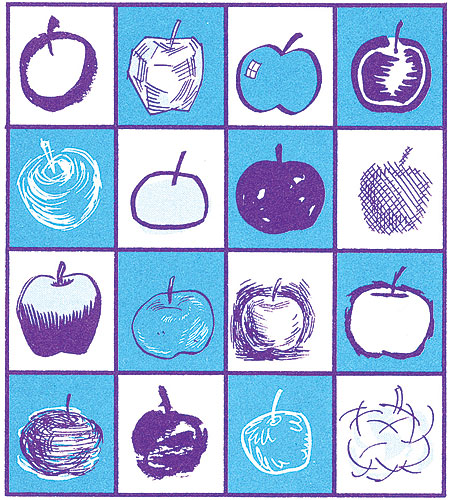 We are all a part of a shared space and whenever we consider something as an exception to this, it becomes inscrutable or more importantly, not what it actually is – completely mutable based upon our own interpretive means. Which, in itself, also alters what the image is talking about, over and over again. For as much as we may convince ourselves of one meaning, we recognize that an isolated image invites countless interpretations. We get lost within our own mind. But when we recognize that there are others within the space with us, we find direction and a sense that our solutions are taking us somewhere, not leaving us stuck in the cyclical nature of an isolated mind.