Rupi Kaur is an Indian-Canadian poet who rose to fame for short enjambed poems, usually with themes about sexual abuse and self-love, posted on instagram accompanied by an original illustration. She is the frontrunner of a new culture of “insta-poets”, taking her success on the internet to ground-breaking commercial success in bookstores all around the world. For her readers, Kaur is a brave young woman speaking fearlessly and simply about extremely difficult themes. And I can see the appeal as someone who, too, has scoured social media like Pinterest and Tumblr for some light poetry reading, but to think that Kaur’s poetry is good poetry– that its writing is actually adding merit to the literary canon– is a gross overration of Kaur’s talent as a poet. If anything, her poems are visually stunning, give the illusion of depth, and she’s willing to give voice to the suffering of young women– but they are not actually good. Here are some of her poems: 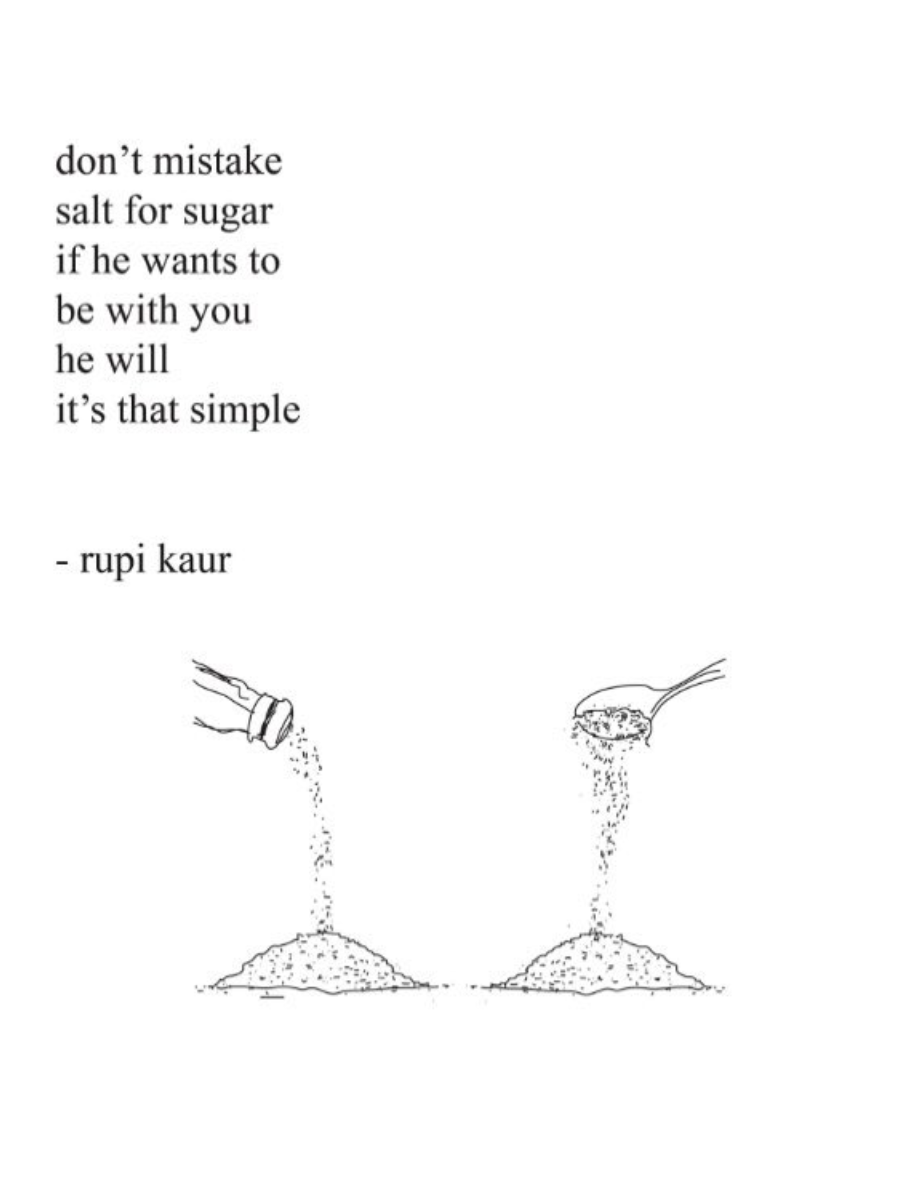 Kaur has mastered the art of making her poems seem profound, especially by capitalizing on the lazy technique of lines breaks. She writes moderately interesting sentences– usually about something taboo and difficult, like rape or confidence or being a woman of color to give an extra sense of thematic intensity– breaks them apart, strips them of punctuation, and adds an appealing image to compliment it to give the sense of a verse form. I can do it here:

The original sentence: A flower grows, sprouts, bursts, in my heart every time I contemplate the garden of our love.

Kaur’s lazy use of line breaks has been ridiculed by many Twitter users:

Kaur’s poetry states obvious, mildly interesting stream-of-consciousness shower thoughts in visually appealing ways. For a young audience who wants to read something about their problems about love or being a woman, Kaur is a championing figure who doesn’t shy away from these intense themes. Her poetry is extremely accessible and readable. You don’t have to read it multiple times in order to understand it, don’t have to crack open a dictionary in order to know what the words mean, don’t need an english degree to unknot the mess of allusions and symbolism and critical theory– it just means what it means. Doesn’t this make it good?

I have eaten
the plums
that were in
the icebox

and which
you were probably
saving
for breakfast

Forgive me
they were delicious
so sweet
and so cold

There is a chaotic energy in this poem, a powerful subtext that needs to be unpacked, something playful and intriguing between the tension of its conversational tone and the almost murderous delight of stealing someone’s plums. This interest and interaction with form is utterly lost in Kaur’s work. Her poems are expected, obvious, and vacuous, painting an illusion of depth where there is none.

And perhaps you didn’t like William Carlos Williams’ poem about the plums. Maybe you’re someone who prefers Rupi Kaur’s poetry, and maybe you think it’s pretentious of me to decide that it’s actually quite bad. Perhaps you’re thinking that this whole poetry thing is extremely subjective– who gets to decide what poetry is good and bad, anyway?

If all literature was subjective, then, there would be no point to literary criticism and an entire discipline dedicated to the study of good literature. Poetry is not subjective. There is good literature and there is bad literature. Your experience of either can be subjective— as in, you can like bad literature and hate good literature, but your preferences don’t change the fact that it’s bad or good. There are certain measures for what it means for poetry to be good, and rupi kaur’s poetry simply doesn’t cut it. Of course, it’s great that a whole new wave of people are enjoying poetry and it’s been made accessible to them. It’s just really bad poetry, vacuous, full of lackluster language and the illusion of profundity, all set on the background of simple type font and a cute line drawing. That’s all.

I’m a 32 year old women on Indian descent who has spent more than half of her life thinking long, hard and deep about sexism, oppressive patriarchal norms, racial and economic injustice, and much more. I also happen to a lover of literature. It’s so refreshing to read this post, thank you Fareah .

Being a thirteen year old wanting to study the arts of literature it’s quite interesting to me the way you find that poetry isn’t subjective
when we’ll, everything is.
It’s funny how you see art in a poem about plums doing the exact same thing Rupi does to be more interesting than I poem about rape made less complex and put in a more complex form
everyone has different opinions I guess

The William Carlos poem is exactly like a rupi Kaur poem

This is an interesting take on Rupi Kaur’s Poems. I think there is some merit to your assessment. However, I also believe that poetry is subjective. It’s important to feel something when you read the words. And this is why Rupi Kaur Pomes are so popular. They make the reader feel heard. The poems are simple and communicate indescribable feelings. It is also presented well. The doodles with each poem also speaks a few words. That’s the reason so many people happen to love them despite the rule-breaking.