Finally! I once again get to express my love for works by Phil Elverum (AKA The Microphones AKA Mount Eerie AKA a lot of other names). His seminal album, The Glow Pt. 2*, is my favorite album of all time, and Mount Eerie is fantastic as well. The albums regarding the death of his wife Geneviève feel just too intrusive for me to listen to often, but they highlight a kind of perspective on death that’s been watered down by media and our understandable “normalization” of death, in that “death is real,” and when you really end up coming face-to-face with having someone you love die, it’s just no longer something to be making art out of, or using as a trite plot device in your novel, or philosophizing about – it’s suffering and it’s horrible and it’s not some abstract concept that’s funny to be joking about anymore. So if you can handle the raw emotional weight of “Real Death,” and I mean real death, not the silly “fake” concept of death often shown in action movies and video games, you (very tentatively) might want to give A Crow Looked at Me a shot. And I’m aware that by writing about death in this manner and being somewhat insipid about this whole deal, I’ve also abstracted away the brutal honesty of death.

*This is kind of a meme, but the first three tracks to The Glow Pt. 2 is like, the strongest consecutive string of tracks ever. Memes are based on truth. 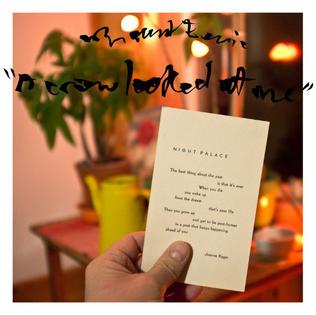 Anyways, back on “lighter” topics of existentialism and the odd duality of man’s technology and nature – “Through the Trees Pt. 2,” the opening track to Clear Moon, expresses what it’s like to be alive today in such a breathtaking and honest way that I can’t help but feel like it might be one of the best songs ever made. The act of writing about and analyzing songs like “Through the Trees Pt. 2” or the experience of real death is somewhat pointless – it will never be as legitimate as really understanding for yourself. But I love this song, so I’ll try my best to communicate why I think it’s so moving.

The ‘natural world’
And whatever else it’s called
I drive in and out of town
Seeing no edge, breathing sky”

“Through the Trees Pt. 2” is a dramatic and incredibly sincere take on being alive. The gentle plucking and heavy reverb of acoustic guitar develops our narrative (and musical) landscape; it’s some solitary moonlit walk through the forest in cold, still air, an understanding of one’s own mortality, and how strange it is to have blood course through your heart and veins and to be walking and breathing at all. At the same time, it’s also that feeling of “walking through the store after work” and driving “in and out of town” – such trivial and uninteresting actions, a kind of ridiculous notion when compared to the weight of being a conscious, living thing. And yet that’s the absurd world we live in – one where mountains and websites coexist.

Phil Elverum washes away the constructs that guide our daily lives, and forces self-analysis at the most primal level – our careers, our place in society, Instagram and Facebook, self-improvement goals, partying over the weekend, social awkwardness, and even our friends and family, are all abstracted away for a raw and no-bullshit look at how overwhelming it is to be some kind of living organism in this gigantic universe. It’s music expressing the naked truth: we live and die in this same fleeting moment, and the marks we make are lost to the infinite expanse of time. The bells of fate chime near the end of our song, but there’s blood flowing through your hands right now.

And that’s really why I think this song is so special. It communicates a strange existential feeling – wondrous, uncomfortable, sad, and contemplative all at once. Have you ever asked yourself this question: “I wonder what it’ll be like when I’m X years old?” And then you become X years old in an instant, and that life of yours you lived N years ago is functionally gone and dead, a memory certain to be lost, to which it becomes clear that this same thing will happen again with this very instant. With really every instant – the tiny one-dimensional snapshot that makes up our lives. Phil Elverum captures that idea in “Through the Trees Pt. 2,” and the result is perhaps the most strikingly sincere song I’ve heard yet.

1 Comment on "Super Cool Singles: “Through the Trees Pt. 2” by Mount Eerie – the probably *actual* most beautiful song I’ve heard"