Pity Sex is a really great band name. It brings to mind the image of a grimy hardcore punk band known for their moshpits and blistering sound. That is not the kind of band Pity Sex was. Sure, their music is full of noise, but it’s far too sweet and melodic to be considered anything close to hardcore, which isn’t necessarily a bad thing. While they weren’t the most influential or captivating band in the scene, they put out some good stuff in the five short years they were active.

Pity Sex formed in 2011 in Ann Arbor, Michigan, as part of a local emo revival birthed out of Sigma Phi, also known as Metal Frat. Their core lineup of Sean St. Charles on drums, Brandan Pierce on bass, and Britty Drake and Brennan Greaves sharing guitar and vocal duties remained consistent until Drake left the band in 2016. After a split cassette with fellow Ann Arbor band Brave Bird, the band released their 2013 debut EP, Dark World. In brief, it’s a short, solid set of songs that mainly dabble in indie rock and shoegaze, though it’s tinged with 90s alt rock and emo sensibilities, at their most cloying sounding a bit like Pinkerton-era Weezer. The band hadn’t really honed their sound at this early point in their career, which made them sound a bit one-dimensional, but there’s something to be said about how well they portray adolescent angst and desire in the dreamy walls of sound and dramatic vocal tradeoffs between Greaves and Drake. Their most well-known song, “Dogwalk”, also came from this EP, and it makes sense why it had such popularity. It’s got a loose, infectious vibe characterized by a slinky guitar line that transforms into brittle noise on the chorus, as well as a catchy vocal melody and an admirably amateur-ish performance. The high-energy instrumental bridge is a nice, unexpected moment, too.

In the same year, they released their debut album, Feast of Love on notable indie label Run For Cover Records. This record saw them operating in much of the same sounds as their EP, with some notable improvements. Opening song “Wind-Up” doesn’t reinvent the shoegaze wheel, but it’s some of the band’s best songwriting, most noticeable in the earworm hook and inventive guitar and bass interplay. “Sedated” and “Honey Pot” are similarly bold and infectious (and actually transition into each other quite nicely!), though the real highlight comes in the mid-album moment of respite “Hollow Body”. The band strips things back to just gentle guitar arpeggios and Drake’s dreamy vocals, and it’s such a refreshing change of pace. It’s simple, elegant, and absolutely mesmerizing. I would have loved to hear them explore this lighter sound more in their time as a band.

Following the release of their debut, Pity Sex toured with some pretty impressive acts in the scene, including Basement, Tigers Jaw, and Code Orange side project Adventures. Following this, they released what would be their final album before going on an indefinite hiatus, White Hot Moon. As with their other releases, it’s an enjoyable, bright record with several highlights (the title track is especially great in its heaviness), but suffers from much of the same problems as well. They had certainly mastered the lo-fi, hazy shoegaze/dream pop sound reminiscent of classic acts like My Bloody Valentine, but throughout their career, they failed to innovate and move past their influences into their own distinct sound. It’s a shame their career was so short-lived; I think it would have been interesting to see how they may have evolved with future releases, especially as they became more established musicians, though I admire their DIY, fledgling spirit. Nonetheless, if you’re looking for music by some Ann Arbor natives, or just some solid music to throw on in the background at a party (or makeout session, if you’re feeling romantic), Pity Sex is a great choice. Let’s hope they reunite for some shows when those are a thing again.

Sidenote: I also think all their album artwork is beautiful!

Songs to check out: “When You’re Around”, “Dogwalk” 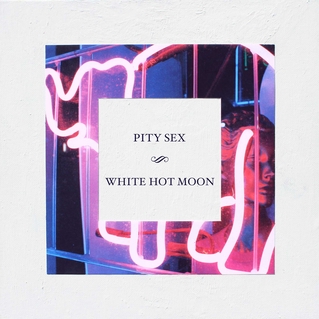 Songs to check out: “What Might Soothe You?”, “Plum”, “Nothing Rips Through Me”, “White Hot Moon”