During my first semester as a freshman I had signed up for HISTART 275: 19thCentury French Impressionism. On the first day of discussion, the GSI asked everyone to go around and name, hometown, favorite artist, and museum. Since going to the Metropolitan Museum of Art is not exactly impressive when you live a short train ride away, I decided to reflect back upon my one trip to Europe (as an awkward 13 year old) and disclosed that my favorite museum had been Monetâ€™s house and garden in Giverny, France. Though I was naively satisfied with myself, it turned out that my classmates were plotting the same move (since they were all from New York). However, instead of listing super touristy spots like Giverny or the Louvre (which I visited, but donâ€™t remember a single thing from because my brother hijacked the visit with one of his food tantrums), they started throwing out obscure museums from Germany, Spain, and Italy â€“ three countries that were not included on the Srinivasans Take Europe Tour 2004 and probably wonâ€™t be the destination of any trips in the near future on account of my empty pockets.

Understanding my plight, Google has recently launched a great new site called â€œArt Project,â€ which lets you revisit museums that youâ€™ve forgotten (like the Louvre), and lets you take a look at the collections of museums you wished you had visited (like the Uffizi Gallery) from the comfort of your dorm room bed. However, this isnâ€™t just a website containing thousands of slides of famous paintings. Unlike other art collection sites, Art Project also allows the viewer to explore the museum itself through 360 degree viewing of gallery rooms and museum architecture. Additionally, this site allows users to compile their own list of favorite works/museums and share it with other users. Not only is Art Project a great study tool (for all you History of Art Majors out there), but it is also a great way to spend a lazy Sunday morning :)Â

Check out the following link and tell me what you think: http://www.googleartproject.com/

Since some of my friends have yet to see such classics as The Breakfast Club or Say Anything, every Friday of this month has been dedicated to watching classic 80s teen movies. Accordingly, this past Friday we watched Pretty in Pink. Although the movie was overly dramatic (and thoroughly unsatisfying â€“ she SHOULD have ended up with Duckie), I really enjoyed getting a glimpse at what life was like 25 years ago. I especially liked the scenes at TRAX, the local record store where Andie works. Seeing the endless rows of record sleeves made me nostalgically reminisce about the â€œrecordâ€ stores of my youth â€“ Sam Goody and FYE, which have since become virtually obsolete.

I guess my question to you is not if you like John Hughes movies (though you should â€“ they are fantastic!), but if you ever miss buying an actual CD instead of an online MP3. Sure, you can get the album art online as well, but is it the same? Has the experience of music become less personal with the advent of iTunes, Rhapsody, and other digitized music stores? Or has technology been beneficial in that it has democratized music and made it easier for more people to enjoy and share? I would like to think that while there are many benefits to purchasing digital music files, there is nothing like running into your local Sam Goody and picking up the newest Spice Girls album. Sure you have to lug around 25 CDS on road trips, but there has always been a story behind the purchase of a physical CD that I have never had in the purchasing of a digital album. The influence of a physical album can be likened to an old (pre-digital) photo â€“ thereâ€™s something about its physicality that makes it real, and thus, more personal.

My family often spends New Years Day recovering from the previous nightâ€™s activities while watching an endless array of movies. ThoughÂ for theÂ past yearsÂ I have had the honor of choosing the cinematic lineup, this year I was overruled by my relatives. Instead of watching a film of substance that forced the audience to â€œthink,â€ my family wanted to â€œescape realityâ€ for a bit and watch a fairly mindless set of action and â€œcomedicâ€ movies. Thus, I was not only forced to watch a bad Bollywood version of Scary Movie, but I also had to endure almost two hours of George Clooney aimlessly running around in The American instead of watching Darren Aronofskyâ€™s Black Swan. However, after finally seeing the movie last week, it seems as if the Black Swan might have actually been a perfect compliment to the plotless films I watched over break.

The Black Swan, starring Natalie Portman, Mila Kunis, and Vincent Cassel, is your basic ballet narrative with a little bit of psychodrama added into the mix. Part Center Stage, Sixth Sense, and Mommie Dearest the film details the rise and fall of Portmanâ€™s character, ballerina Nina Sayers. Though Sayers wins the lead role in a production of Swan Lake, she seems to become increasingly conflicted and embattled regarding her own identity and reality. Ultimately, through her efforts to find herself, Portmanâ€™s character is often in conflict with her foe, Kunisâ€™ Lilly, or her mentor (played by Cassel).

While I found the visual aspects of the film to be extremely compelling (ex. the GORGEOUS costumes by Rodarte and the exquisite dance sequences), the plot itself is not entirely unique. The movie basically boils down to the following stereotypical narrative: A ballerina strives for perfection and this obsession with perfection is his/her downfall. While the occasional bloody/gruesome scenes help to divert the audienceâ€™s attention away from this fundamental storyline (especially the one scene in which Winona Ryder seems to stab her face with a nail filer!), the ending is ultimately predictable and unsatisfying. I left the movie theater not only confused as to why this movie was so heralded in the first place, but also happy that my parents werenâ€™t there to witness my cinematic upset. But, then again maybe I just didnâ€™t get it. Let me know what you think in the comments section below 🙂

Yesterday I had the pleasure of getting up close and personal with one of UM’s most beloved aÂ cappella groups – THE FRAIRS! The guys who are known for musically musing about North Face Girls and Seasons of BeerÂ visited my dorm for a quick preview of their upcoming concert and it was fantastic! Not only did they perform some serious tunes (one was about how mundane life is – especially good to hear during preparations for finals), but they also sang one of my new favorite tunes, Facebook Me. However, in addition to displaying their vocal virtuosity, these boys showcased their smooth moves. Yep, theyÂ can sing AND dance (can’t you hear the girls of MCB swooning in the background?!) Suffice to say, it was a highly entertaining way to spend an eveningÂ and I definitely suggest that you all pencil in their concert this Friday night (8 pm at Rackham) into your busy schedules. Yeah it might cost a couple of bucks,Â butÂ at least it will be moreÂ culturally satisfying than watching reruns of the Jersey Shore on TV.

YouTube is useful for many things such as procrastination, music appreciation, and most importantly, rediscovering old TV shows that you once were obsessed with. For me these shows have included Boy Meets World, Celebrity Mole (the one with Kathy Griffin), and more recently, Alias. Hopefully some of you watched Alias during its heyday (before Jennifer Garner left), but for those of you who missed out here is the basic premise: The main character, Sydney Bristow, is a graduate student by day and double agent by night who is trying to avenge the death of her fiancÃ©.

The brainchild of J.J. Abrams (of Lost fame) is a spy thriller that will keep you constantly guessing. However, unlike other action shows, Alias doesnâ€™t rely wholly on explosions and car chases to engage the audience. Rather, Alias is grounded in an intelligent and original plotline that is always unexpected. Though some of the dialogue/themes are slightly cheesy (i.e. Sydneyâ€™s painfully obvious daddy issues), Bristowâ€™s character remains far more compelling than her film counterpart, Lara Croft.

For those of who you liked Lost (or didnâ€™t, like me, and just like good TV) be sure to give this one a chance. Itâ€™s a far better option that watching reruns of the Jersey Shore.

Sunday afternoon often only means one thing â€“ Football! But, donâ€™t worry though; I wonâ€™t unleash my inner NFL nerd (just kidding!). Instead, in keeping with last weeks post on fashion trends I have decided to dedicate this weekâ€™s post to the evolution of the NFL jersey. As a die-hard fan of the New England Patriots (who better get their stuff together in Cleveland), I am partial to their red, white, silver, and blue jersey. Not only is it patriotic, but also it is also way more sophisticated than any other teamsâ€™ jerseys (Iâ€™m looking at you Minnesota). However, it wasnâ€™t always so classy. To demonstrate, letâ€™s flashback through the various incarnations of the Patriots jersey.

Â Though I couldnâ€™t find what the actual uniform looked like during the Patriotâ€™s first year, each of the helmets had an image of a three-point hat with the playerâ€™s number under it. This then gave way to the throwback uniforms that we have seen a lot of recently. From 1961-1996, the Patriots wore a primarily red jersey for home games and a white helmet with the mascot (â€œPat Patriotâ€) hiking a football. Helmet is awkward and the blood red is blinding.

Â In 1996, the clumsy helmet logo and obnoxious jersey color were changed to a more streamlined logo and visually pleasing blue color. Logo is great, but the blue is still a little too bright.

In 2002, the bright blue jersey color was replaced by a darker navy color. Perfection. 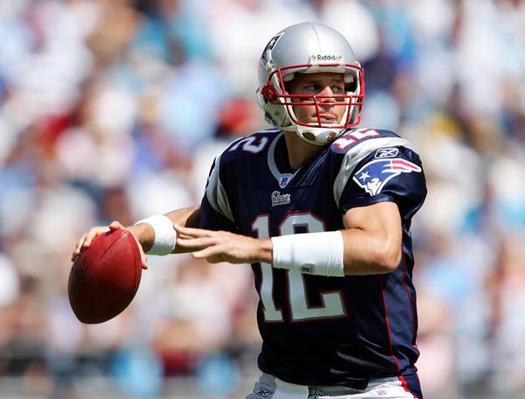 How do you guys feel about the recent trend in wearing throwback jerseys? Do you have a favorite team jersey, football or otherwise? Let me know in the comments section below. Have a great weekendÂ 🙂 (Information gathered from http://iml.jou.ufl.edu/projects/fall05/brownlee/patriots.html).