One of the most unrecognized and unappreciated music genres is ambient music; I should know, I hadn’t really listened to an ambient album until this year. It wasn’t out of strong feelings either, it was just a lack of knowledge about what defines good ambient music and what the purpose of ambient music is in relation to other genres. Personally, I ascribe a specific emotion or mood to certain genres, just based on my experiences with them and their energy. For example, I listen to metal to get angry or determined, classic rock to be happy or calm down, hip hop to be challenged musically, classical to feel studious or refined, etc. Previously, I associated ambient music with boring music, simple to make and unimportant. Only recently, when I started listening to the Monument Valley soundtrack on vinyl in my room, did I start to appreciate the unique place of ambient music. Now I want to present three of my current favorite ambient albums and give some thoughts on what makes each one stand out. If you’ve been keeping up with my posts, you’ll know I already discussed Monument Valley in detail and how much I love it for its style and simplicity. Those same principles work just as effectively on its soundtrack, which is airy, vibrant, and absolutely gorgeous. While some might argue that it belongs in a different genre, I would say that the subtle instrumentation and clear effort put into the sound design and composition place it firmly in the ambient genre. This record has been my first experience with ambient music and it has made me realize that ambient music is meant to be appreciated thoughtfully; each note is placed with purpose and every silence is more expressive, since there are no distractions from the minimal atmosphere. Other music genres often become formulaic (intro, hook, bridge, chorus, repeat), but ambient music is forced to do more with less, leading to really fascinating instrumentation and musical development. 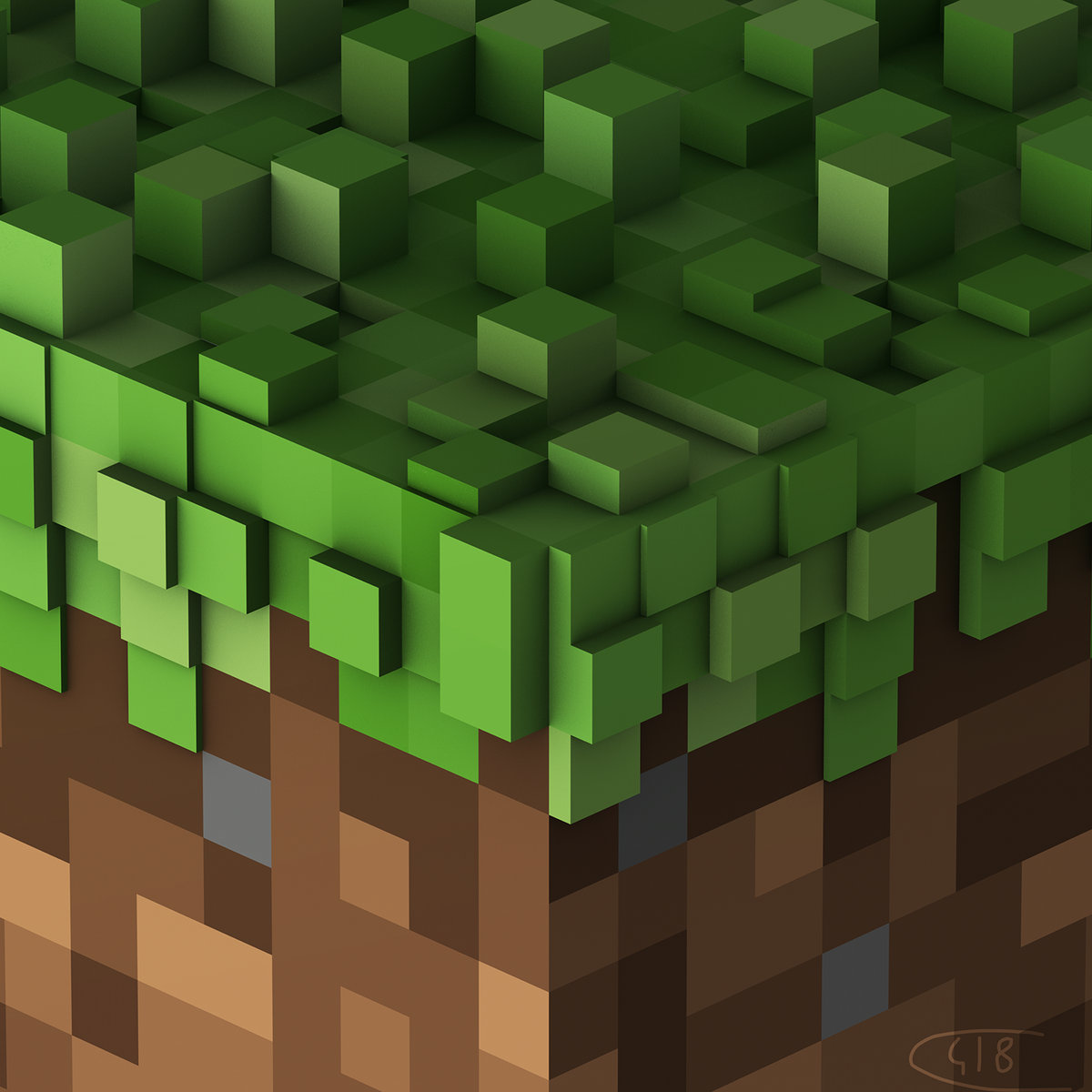 Another ambient album I’ve been listening to is the Minecraft soundtrack, Volume Alpha by C418. You might be surprised to see another game soundtrack on here, especially one that you wouldn’t recognize if you haven’t played the game. However, it has recently become appreciated as a truly special ambient album; people who play the game might not be able to tell you a song or what it sounds like, but they’ll be able to hear it and tell you exactly where it’s from. Most interesting to me is how well the soundtrack complements the style of the game, but also how well it stands alone. It features a lot of bright piano and synths, along with some really unique instruments that are folksy and adventurous. It’s a great example of the creativity that ambient albums embody, not only in composition but also in atmosphere. Whether in games or as stand alone projects, ambient music is often interpreted as a means of creating atmosphere with background music, but there exist many albums such as this one that are even more interesting and unique when appreciated alone.

Last but not least is this gorgeous record Kankyo Ongaku (Japanese Ambient, Environmental & New Age Music 1980-1990) by various Japanese artists. I never would have found this if it hadn’t been reviewed by theneedledrop, who gave it a very favorable review and piqued my interest. This album stands apart from the first two, not only because it is a stand alone ambient project, but because of its Japanese compositional influences. It fits the common mold of ambient music, featuring crashing waves, chirping birds, and other natural sounds (as expected by the title), but it defies the typical boring stereotypes that usually accompany that style. It does so by being expertly crafted and full of intention; the opening track itself is a testament to the articulate style of the album, featuring precisely placed bells and drones, each with a specific balance and design that creates a thoughtful, meditative space. The whole album is intricate beneath the surface, and requires sharp attention to detail; I listen to it with headphones at night, when everything is quiet and I can truly appreciate every perfectly placed note. This album is the perfect example of what makes ambient music so unique, and I hope that more people can develop an appreciation for these qualities just as I have. The history of mobile games is volatile at best, built on cheap gimmicks and popular trends, as seen in games such as Fruit Ninja, Angry Birds, and Flappy Bird. Overall, mobile devices have long been abused and misused as mediums of quality artistic expression, lacking notable works of art and remaining barren of any significant creative expression. It is certainly not due to any inherent limitations of the medium; most modern smartphones can compete with modern laptops and computers relative to graphics and hardware capabilities, but more likely due to the precedents set by the first mobile game gold rush, started by simple, cartoonish games that relied on repetition in order to increase advertisement time. However, one game series stands apart from the rest in every single way: Monument Valley is a stunning and surprising work of art, featuring an amazing style, atmosphere, and complementary soundtrack, all relying on a simple yet endlessly fun and fascinating gameplay. Not only does it demonstrate the true artistic capabilities of the mobile medium and set the bar for future artists and developers, it does it all without relying on cheap ads and gimmicks.

I discovered Monument Valley when it was first released in 2014, as I was scrolling through the home page of the Apple app store. It was praised as a truly unique puzzle game of “impossible geometry”, and it featured a minimal yet beautifully crafted art style. It was actually the first mobile game that I paid money for, which was certainly unusual at the time, especially considering it was $2.99. In hindsight, I find it fascinating how quality mobile game studios are forced to sell their games so cheap relative to console games, which often range anywhere from $20 – $60, just because the mobile market is dominated by cheap games that depend on adds and in-app purchases. Needless to say, it was the best $2.99 I ever spent: since I first opened the game I couldn’t stop playing, I was completely immersed in the colorful and intricate world of Monument Valley.

The game relies on a simple tap to move mechanic, as the player tries to guide the protagonist Ida to the end of each maze-like architectural wonder. My favorite part is the clear care and detail that went into every level of the game (of which there are only 10 levels), as seen in the design, art style, atmosphere, accompanying soundtrack, and subtle plot that is developed throughout, as the player discovers more and more about this forgotten world of impossible geometry. Compared to other mobile games, its simplicity is its greatest strength: it features a few main characters, a simple mechanical concept, and puzzles that are challenging but never impossible. However, it sets itself apart in its quality and artistic craftsmanship, where each level is its own world, full of clever tricks and beautiful geometric design, which perfectly complements the game itself while also making every frame a work of art in itself. 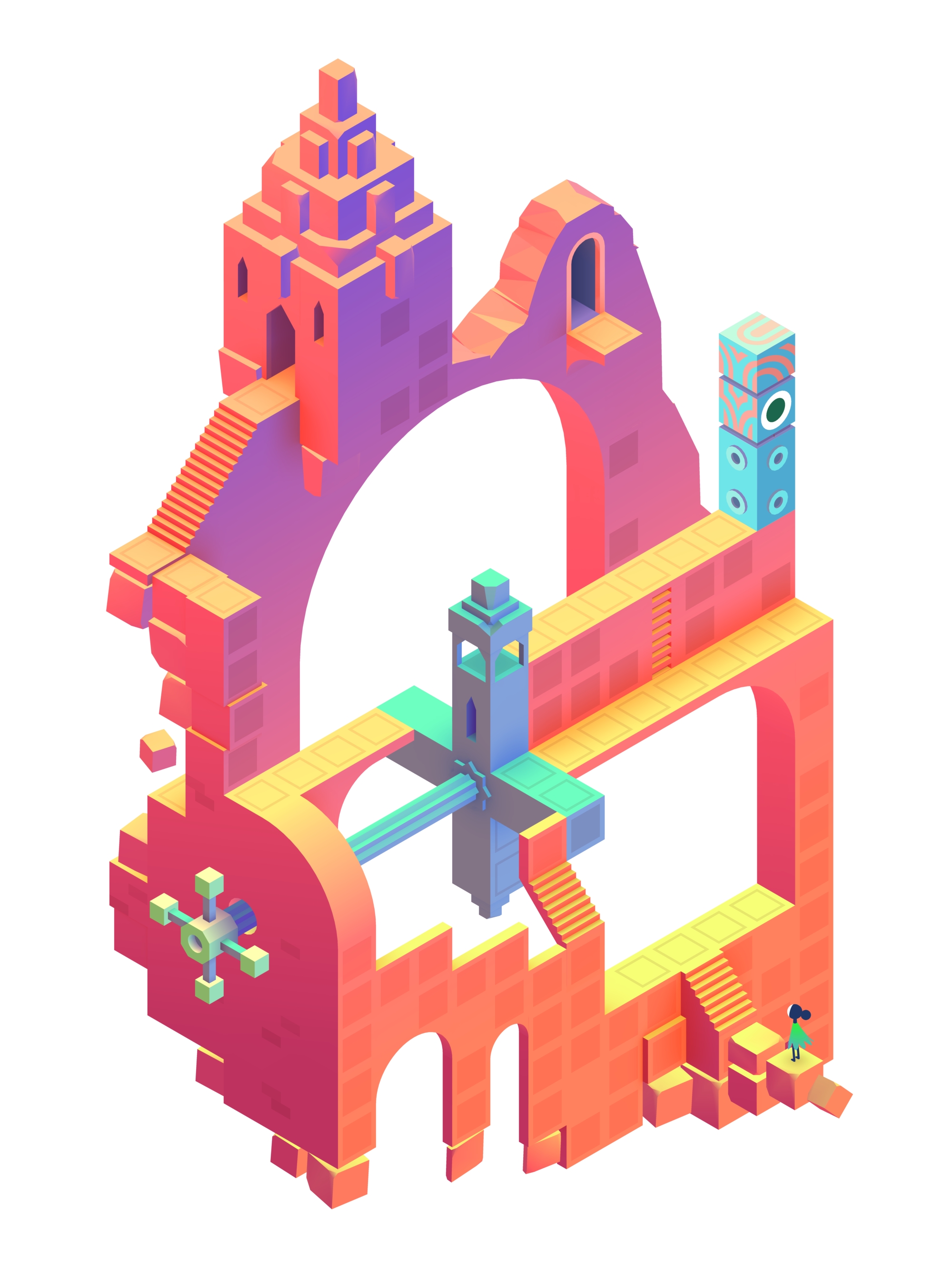 Monument Valley is entirely unique and deserves to be recognized as a work of art, just as significant as any great album or famous painting, if not more so for its role in breaking the expectation of what a mobile game has to be. It is not meant to be played endlessly and mindlessly, but instead appreciated and savored; it is not a pitiful attempt at money grabbing, but a beautiful artistic concept that was perfectly executed through the mobile medium. The developers continued to build on the exceptionalism of Monument Valley with Monument Valley: Forgotten Shores, and Monument Valley 2, which I both equally recommend (Monument Valley 2 deserves its own post, considering how it expands on the themes of the first game while completely revolutionizing its art style). I would love it if these games could receive more recognition, not only because they deserve it, but because they represent everything that mobile games should be.

Being a semi-immobile student at U of M, I rarely get the opportunity to branch out to the fantastical ‘real world’ off of this campus and bask in its awesomeness. Luckily, the opportunity came about this weekend. Where was it absolutely imperative that I make a stop at? Yes, my beloved and forever a staple, Barnes & Nobles Bookstore. There’s this really big one somewhere out in that real world that sits high in the sky and when you walk in there’s the hustle and bustle of readers, writers, coffee addicts, and pure happiness throughout the air. The books line all of their perfectly organized rows, (like in every B&N you come across…I don’t know why I’m being dramatic) and the opportunity to get lost in new worlds are endless.

There is just something about a great bookstore that really brings me true happiness. Is it the books? I love reading, but lately my Kindle is where I easily search and find my new conquests. Maybe it is the people? Young and old alike, meshing together to immerse themselves in literature, business, chit-chat, and music. Hmm, Â I don’t think it’s just one thing I can pinpoint that makes bookstores my favorite place in the world. I think it’s a large concept that transcends to all that I am as a person.

Bookstores evoke my favorite parts of myself…in a store. Is that weird? I don’t care, it’s true. I enjoy reading really great books that I can escape into. Fall hopelessly into and work hard all day just so I can get the opportunity to fall back in and get lost again. Being surrounded by the latest and the greatest is one of the great pleasures of bookstores alike. Most carry classics that will always bring you peace, and the new ones they offer will definitely get your wheels turning. Back when I had my first job at 16 working in my local mall, the bookstore was my favorite stop every chance I got a break. I would grab the book that interested me of the moment, and read it every time I had that break until I finished it completely. The best part was I didn’t have to spend a dime because it is socially acceptable to consume the merchandise at a bookstore. Maybe that is the true reason why I love them so much…

Then there is the atmosphere. The way in which this structure (depending on how advanced this society gets) will never go out of style and there will always be at least one person who can appreciate it enough to walk in there. People are all around, doing their own thing and making the most of their shopping experience.

From what I mentioned before, I do fear of the impending way that these brick and mortar bookstores will change due to the advancement of technology in our society (Fahrenheit 451 moment anyone?). I am proponent of utilizing a digital reader for books, magazines and music. I will search Amazon and have the ability to go through my day without any physical or time-consuming interruptions. Yes, a lot of people lack the free leisure time to immerse themselves in bookstores to possibly buy nothing, but could entirely taking out the symbolic structure from society really be the next step? We have to have bookstores on our streets forever. They’re magical, inviting, safe, and fun. I guess we must wait and see what the future holds, but until then I will continue to cherish the time I get to spend in a great bookstore.