Zoey Deutch plays Erica with frantic energy, never missing a step with the off-beat procession of a plot. With this momentum, Flower crashes into the disastrous second act, hurling through any possible wit and subtlety. Teenage angst sits like a white elephant in the theatre.

It’s unfortunate because Flower builds its potential with a great sense of humour and the visuals of suburban complacency. The characters pop in lush colour from the set of a hazy town and the backdrop boredom of teenagers who would kill themselves for something to do.

From this overarching archetype arises classic films like American Beauty, The Virgin Suicides, Heathers – and now newer attempts such as Flower.

Erica is our anti-hero of the story, a sixteen year old who opens the film by giving a blow job to a local cop, her friends perched with a video camera for blackmail. She has the unstable sulk of an adolescent, the kind of slightly-out-of-touch with reality that teenagers can be. She seems reassured, chirpy, and Zoey Deutch plays her with such ease, comfortably digging into the gritty corners of her character. There’s a certain depth to her character that unfortunately doesn’t extend to the rest of the film, a vulnerability that doesn’t lag the plot but drives it with considerable force.

Despite how nonchalant Erica may seem, how much she insinuates she doesn’t particularly care, there’s moments like where she counts her bail money, calls her father in the closet, or dances with Luke where she burns onscreen with casual complexity. Her use of sexuality like a weapon, her indifference, and the way she talks big is underscored by the innocence of her age, the strangeness of her home life.

So whether Flower is an enjoyable film depends on its framing – if the plot is taken straight and serious, or if we give it the benefit of the doubt that the movie has a great deal of self-awareness. It seesaws between attempting to be a coming-of-age story with all the staple honesty and alienation of growing up and a black comedy film – both which fall just short of accomplished. 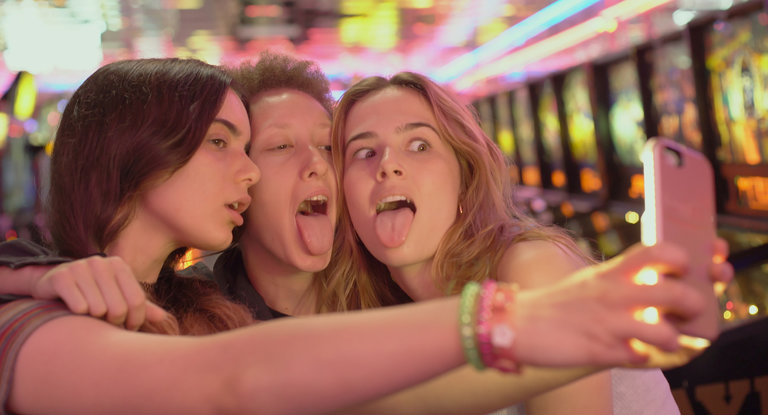 While the plot becomes increasingly surreal and ridiculous, the film also attempts to become emotionally more serious, reaching for some great insight as the ending nears. Heading into these two completely different directions simultaneously, it pulls the movie thin, ultimately leaving something to be desired. Here, the story is tied up with an oddball ending with no real resolutions or consequences to the actions of the characters, even though it sets us up to feel and sympathize with Erica and watch her grow. As a result, the film falls flat and caricaturizes the main character in a way that doesn’t read intentional.

Flower is commendable for its effort, for Zoey Deutch’s portrayal of Erica. It has a compelling energy, nice comedic timing, a velvet morbidness. But it tries to be too much, and by the rolling of the credits, it seems to have fallen apart from its rocket-booster start.