Makoto Shinkai’s Weathering with You tasted like something akin to cilantro: soapy, spritely, sometimes confusing, and ultimately, edible. The Japanese animated romance-natural disaster-fantasy film weaves an aesthetically compelling yet narratively lacking film about two young lovers brought together by the power of sunshine amidst Tokyo’s endlessly dreary summer rains. Hodaka, the male protagonist, is presented as an impulsive high school runaway who leaves the vaguely depicted discomfort of his hometown to chase a more unrestrained lifestyle in Tokyo. His story thus becomes entwined with that of Hina, a cheery “sunshine girl” whose prayers cause the city’s clouds to part for minutes of sunlight.

“I want you more than any blue sky.” – Hodaka Morishima, Weathering with You

The film motions towards gritty themes through the pair’s struggles with homelessness, the sex trade, and armed terror – which at times seem like decorative attempts to add dimension rather than gripping allusions to reality. Due to the sheer number of unresolved issues added to flavor the narrative, the film’s ending felt incomplete and soapy. I questioned the importance of certain ‘gritty’ motifs such as Hodaka’s recurring gun stint, and the development of his savior complex in response to Hina’s woes. I found Hina’s character, an orphaned “sunshine girl” fatefully burdened by dramatic choice, emotionally strong yet ultimately stifled by Hodaka at every twist and turn in the film’s plot. Though Hina braves mature duties to her brother, the eternal fate of Tokyo’s weather, and herself, Hodaka continuously leaps in to save his magical “sunshine girl” – most of the time without her consent. Hina’s acts of sacrifice exhibit both mental strength and a keen understanding of her fate with cumulonimbus clouds; however, they are selfishly averted by the ever-spontaneous Hodaka. Indeed, Hodaka’s character does not seem to view Hina’s personal decisions with the autonomous power that they deserve – eventually, Hodaka’s failure to recognize such leads to Tokyo’s partial submergence in water. I found this plot decision to be the most confusing and also the most inconsistent with the traditional collectivist views perpetuated in many East Asian countries like Japan – why value Hina’s corporeal existence over the entire wellbeing of Tokyo and its citizens? Is Hodaka’s intervention representative of the foolish nature of young love? Or perhaps, the stubborn inaction over climate change concerning Earth as we know it? 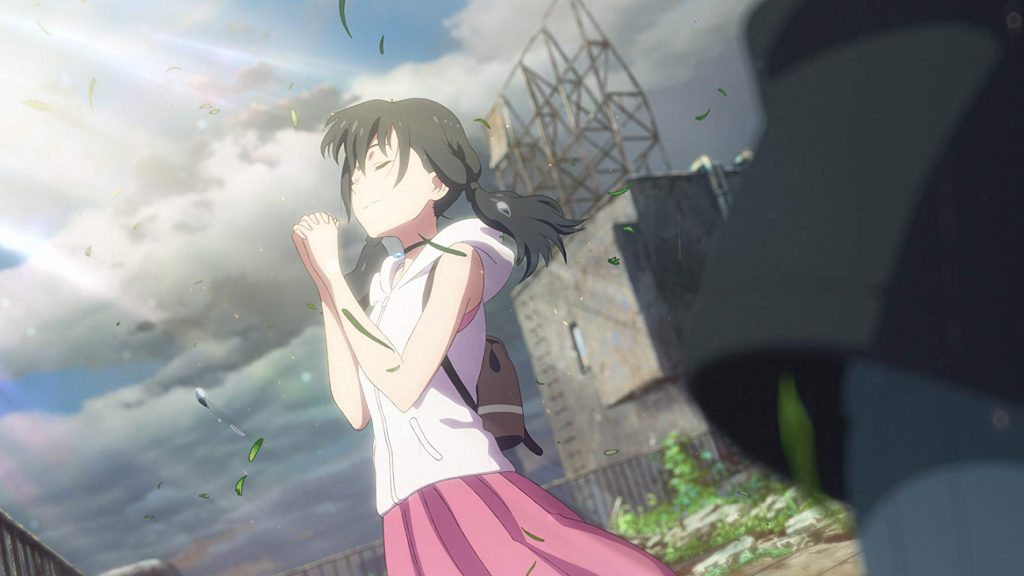 Climate change and its ominous effects on the human spirit are central to Weathering with You; beyond the film’s narrative soapiness, the animation direction does a beautiful job of capturing the nuances of weather and mood. Hina’s characteristic hand movement of reaching up towards the sky, the newfound sunlight filtering through her fingers, is so distinctly human, and touching within the context of Tokyo’s depressing weather. The animations carry the same underlying thread of childlike wonder and curiosity throughout the film, transporting the viewer into a parallel universe set aglow with fantasy with every sunshine prayer Hina wills unto the clouds.