Autumn de Wilde’s Emma. offers a refreshingly whimsical and defiant, pastel-colored adaptation of Jane Austen’s classic romance-comedy novel. The quirky addition of punctuating the title itself complements the film’s mood and aesthetics perfectly, and reflects the protagonist’s emphatic and self-assured mannerisms. The film opens with an elegant quote and homage to Austen’s 1815 novel,

“Emma Woodhouse, handsome, clever, and rich… had lived nearly twenty-one years in the world with very little to distress or vex her.” – Jane Austen, 1815

Indeed, actress Anya Taylor-Joy portrays the titular character Emma Woodhouse every bit as ‘handsome, clever, and rich’ as she perceives herself to be. Taylor-Joy has perfected the detached and rational, yet keenly observant composure unique to Emma and other queen-bee characters, which she punctuates with a penetrating and cool stare that the viewer learns to associate with the plot’s twists, turns, and grievous misunderstandings. Unabashedly headstrong as Emma may be, the character has historically carried certain unlikeable qualities that set Emma apart from Austen’s other famous female protagonists – Emma is spoiled rich and prideful, and with that pride wholly conforms to her period’s class and status norms. Additionally, her stubborn convictions as a self-proclaimed neighborhood matchmaker are almost manipulative, especially when examined alongside the friendship she forms with the less-sophisticated, bumbling Harriet Smith. However, de Wilde’s adaptation and Taylor-Joy’s performance not only allow but also highlight these traditionally unfavorable traits, which is precisely what I find most charming about this film. Unlike its predecessors, Emma. does not attempt as much to reconcile Emma’s haughty, self-satisfied nature with ‘good-girl’ behavior; to the end, Emma’s pride remains undiluted, even as she receives her happy ending with Mr. Knightley. 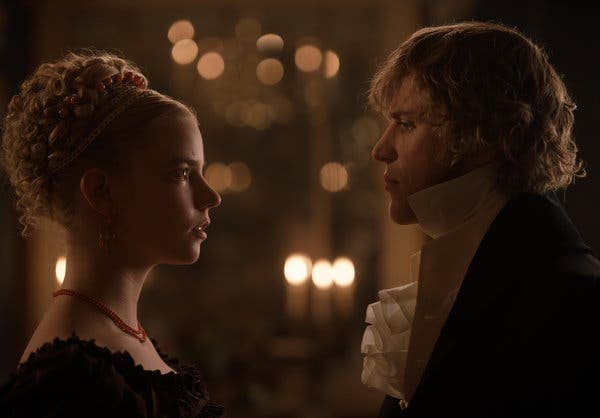 Though de Wilde’s interpretation of Emma. is slightly modernized in terms of its unapologetic treatment of Emma, the storyline and costume elements remain true to the original narrative while introducing color and whimsy. The cinematography and visual aesthetics of Emma. are every bit as vivid and spirited as the female lead herself, and can be likened to a sugary and symmetrical Parisian macaron. De Wilde’s use of visual symmetry is consistent and strategic, most evidently when interweaving type into lush backgrounds and more subtly to emphasize Emma’s careful hold on her town’s social hierarchy. In later scenes, the visual symmetry is pushed to represent symmetries between characters such as Emma and Jane Fairfax, a multitalented, elegant woman of Emma’s same age. The dreamy and ornate filming locations, shot around England, further emphasize the lavish lives of the characters in Emma. and the comedic frivolity of their distresses.

If you’re seeking a wonderfully lighthearted, visually pleasing period film – I would highly recommend heading over to the Michigan Theater to watch Emma. You can find tickets here.