This show unquestionably lived up to its name! I was so happy to be going to see live theater again after the height of the pandemic, and this was a fantastic show to begin on. I loved the music, vocals, outfits, and just the experience of being in a theater with a live audience after such a long time.

The first thing I think it is important to comment on is the fantastic vocals from both the lead actors. I was awed by their voices, and I realized that I have never really heard anyone from the SMTD program sing before. I enjoyed their solos as well as their duets, and I got a great sense of the major vocal ranges that both of them possessed. The music also provided many opportunities to impress, as it was complex and well written. I loved the sort of jazzy style of some of the music, and I thought each song sounded unique from the others. Also, this musical had basically no dialogue and was almost entirely singing. So I was doubly impressed that there was full voice singing and dancing the entire show, which was over 2 hours. I also loved some of the more modern implements, the most interesting of which was the inclusion of “phones” as a prop. In many of the scenes, the characters were holding phone-shaped items that just let off enough light to be bright in the darkness. They used these props as phones, as a way to light up their faces, and as faux recording devices during exciting moments. I think this prop brought the show into a more modern “gossip girl” style, as it was advertised that it would do. However, I think it wasn’t enough to let me know that was the intent without me having known that beforehand. While I did really think this prop was cool, I was actually hoping they would do more with it. Perhaps a part of the show could have been in darkness with the phones as the only light, which could have looked very cool.

The only critique I really have for this show was the sparkly streamers that lined the back and sides of the stage. These reflected the light of the spotlights and were super distracting, especially during serious moments. I found them hard to look away from even when I wanted to be watching a scene that was going on between characters. 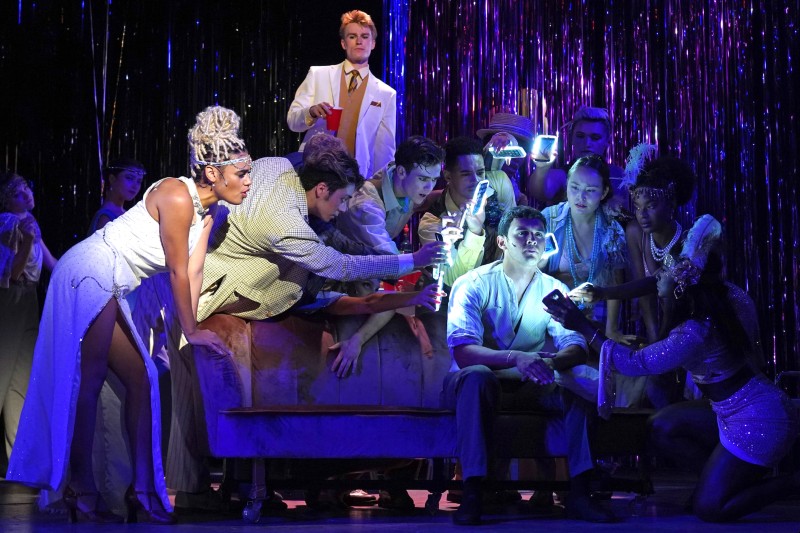 Finally, I want to mention the amazing performance by the male lead. His character’s steady progression from confident boyfriend to unhinged psycho was amazing to watch. He did a spectacular job with this slow descent into madness and I didn’t even notice how unstable he was becoming until he started really acting insane. His solo at the end of the show had crazy vocals and he really kept up his energy through the end.

I would definitely recommend this show to anyone who likes musicals. The vocalists were amazing, the dancing was quite impressive, and the storyline had me hooked. It also gave an important message about domestic violence, and I thought the director did a great job getting this message across. Not a show for children, but I would recommend this show highly.

One thought to “REVIEW: The Wild Party”