On Thursday October 25, the Kerrytown Concert House hosted an ‘Out of the Box’ musical performance, arranged and enacted by professors from several departments: Henry Pollack of Geophysics, and Steve Rush and Michael Gould of the School of Music. As part of the Abacus and Rose: SciArt Live series, which pairs scientists with artists, the trio of scholars created a stylish, modern piece called ‘Earth Without Ice.’

The performance consisted of a series of noises that soundtracked a slideshow of images projecting from screens on stage that faced the audience. The ‘immersive sonic landscape’ was composed of ‘found sounds’ taken from the Huron River. The photos came from Dr. Pollack’s visual journal as part of his most recent transit of the Northwest Passage from Alaska through the Canadian archipelago to Greenland. They featured vast oceans, floating chunks of ice, inuit peoples catching and gutting fish, elders laughing together, youngsters playing, seals and polar bears splashing, open earthen landscapes, and lots and lots of factories. The contrast between the natural images and the industrial environment was striking. The music was appropriately mixed to match the effect of the scenery. The recorded, manipulated, and live noises created an unusual interplay of sound which caused a strong affect on the curious audience.

The inspiration for the content came from Dr. Pollack’s recent book ‘A World Without Ice.’ The style, however, seemed to be inspired by a  hybrid of John Cage’s Water Walk and Andy Goldsworthy’s nature photography. I liked the performance a lot.  It conveyed a strong message about expressing the danger of climate change through artwork. It was a very unusual performance, but equally entertaining and certainly out of the box.

The Oscars happened last Sunday and The Artist was a sweep. But this time next year, look out for the film Pina. See it in theaters now, remember it when awards season rolls around in a year. This spectacle is bound to be a hit.

Pina’s work in modern dance escalated in the 1970’s and continues to be influential today. Her role as a director is most prominent in Tanztheater, which translates to “dance theater.” She spearheaded a company in Germany by the same name, though throughout her career she worked with the gamut of cross-continental dance fame. In Tanztheater, Pina created celebrated pieces such as Rite of Spring (1975), and Café Müller (1978). Both are exemplary of her outrageous style: in the former, dancers move about on stage completely covered in soil and in the latter, they aggressively crash into chairs and tables on a café set. Both are reenacted beautifully in the film. 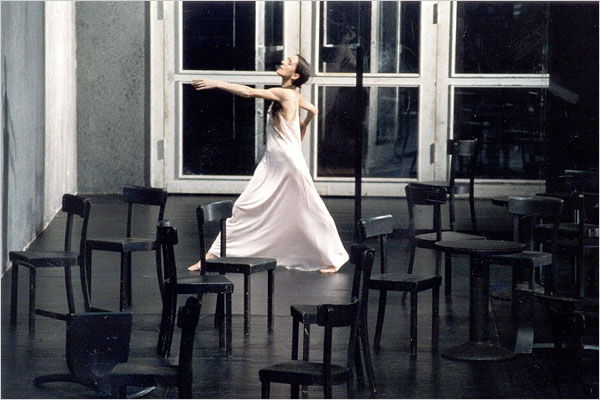 Image from Rite of Spring

So thats the overview of who Pina is: a creative, expressive, and innovative movement artist. And now about this crazy movie that she inspired: Oscar-nominated film maker Wim Wenders has been a fan of Pina since the 80’s and decided to document her work in action. His crew followed hers long before the project took off, building artistic relationships between those in front and behind the camera. Unfortunately, days  before the shooting began, Pina died unexpectedly of a sudden cancer. The fim, therefore, began a tribute to her life more than just a portrayal or her work ethic.

The sets incorporated a wild combination of elements. Here, I mean earth elements: dirt, mountains, water, plant life. Some performances were filmed on a traditional stage, while others sought peculiar venues like rooftops, subway trains, swimming pool decks, or glass paneled houses in the woods.

The dance numbers were performed by professionals from Pina’s company. Their segments were separated by close- ups combined with voice overs in the variety of languages spoken by the worldly crew: Spanish, French, German, Portugese, Japanese, Chinese, English, and more. They talked of Pina as a guiding artist and all that her ingenuity and freedom of expression taught them about themselves, their bodies, and their work.

Counter to the common conception of dancers as always youthful, these workers ranged vastly in their ages. I found this point to be very curious. It spoke to the life long development of artists and how they become enriched as they ripen in their craft. Their ages may be have been evident on their skin, but the astounding strength and nimbleness of the dancer’s bodies far from gave them away. In fact, there was one piece in which dancers of various eras of life were dressed in identical outfits, confusing the audience about who was who. It was a number that could only have been performed for screen dance. I don’t see how this switching of characters could be performed live without the trickery of editing.

I asked my cousin, who works as a professional ballet dancer for the Boston City Ballet, his opinion on the work. “I thought it was beautiful,” he said. “She’s so unique in her choreography.”

And I agree! Watching Pina was one of the most visually pleasing experiences I have had in a long time.It was creative, stunning, marvelous, and inspirational beyond belief. I would feel badly for anyone who misses the opportunity to experience it.

Hurry up and see it! I’m serious, this was a very powerful artistic undertaking. The documentary has already swept up  The European Film Awards and German Film Awards, as well as receiving nominations or Official Selections from The Academy Awards, New York, Telluride, and Toronto Film Festivals. Pina is only playing at the Michigan Theater through this Sunday, March 4th. Check the Michigan Theater website for show times. Also, here’s and interview with director Wim Wenders from the New York Times. For more background on the production, check out the movie’s website .