I think consumers of pop culture like me are naturally inclined to love rankings. Top 10 movies of the year! Top 10 summer TV shows! Rankings allow us to discover new things and retrospectively reevaluate art we may have already experienced. Reading movie rankings at the end of the year is one of the irresistible pleasures of being a regular moviegoer and criticism reader.

But they can be a real pain in the ass to create yourself, and that’s due to one problem in particular: it’s so unclear what it means to like a movie.

A year ago, I decided to maintain a list of movie rankings for each year. At the end of 2014, I’d struggled to look at the 57 movies I’d seen and simply rank all of them; it’d be much easier, I figured, to gradually add to the ranking each time I watched a new movie in 2015. And it did start off okay! The first two movies I saw in 2015, “Kingsman: The Secret Service” and “The DUFF,” had an obvious quality gap; I loved the former and thought the latter was okay, so in my preliminary ranking, “Kingsman” was #1 and “The DUFF” was #2.

I found, though, that as the year went on, it became much harder. I ran into the same problem that I ran into in 2014, namely that it’s really hard to determine overall quality. It’s the same reason reducing a movie to a simple grade is so hard. It’s why I’ve come to appreciate websites whose reviews lack star or letter ratings.

What makes you “like” or “love” a movie? I’ve found almost invariably that most of the movies that are regularly considered the ‘best’ of the year are movies with which I don’t have a huge emotional connection. I was totally engaged throughout “Spotlight,” for example, and there were moments where I was horrified and moments where I felt triumphant. If it does go on to win Best Picture at the Oscars, I’ll be totally onboard, because I know intellectually that it did everything so well. But then I watched “Spy,” “Trainwreck,” and “What We Do in the Shadows,” three great comedies that made me laugh constantly throughout. Are they all as technically accomplished as “Spotlight?” No, and of course none of them have subject matter as important as “Spotlight.” But if “Kingsman: The Secret Service” made me ache with laughter and stunned me with its ridiculously over-the-top, colorful, exhilarating action sequences, is it really that bad that I ranked that above “Spotlight,” “Carol,” “Brooklyn,” “The Hateful Eight,” and most of the other big Oscar nominees?

This especially becomes a problem when I consider movies that I didn’t really like, but which showed a clear creativity and ambition. “The Gift,” though very acclaimed, felt shapeless and confusing. In my review, I called it “admirable in its unconventionality but jarring in ways that negate its intelligent ideas,” and I stand by that. “The Gift” had an abundance of fascinating ideas that made me want to see more from writer-director Joel Edgerton, especially compared to a cliché, forgettable movie like “The DUFF” or even “Trainwreck.” And yet “Trainwreck” was my #11 movie compared to #44 “The Gift,” and even the predictable “The DUFF” managed to pass “The Gift.” 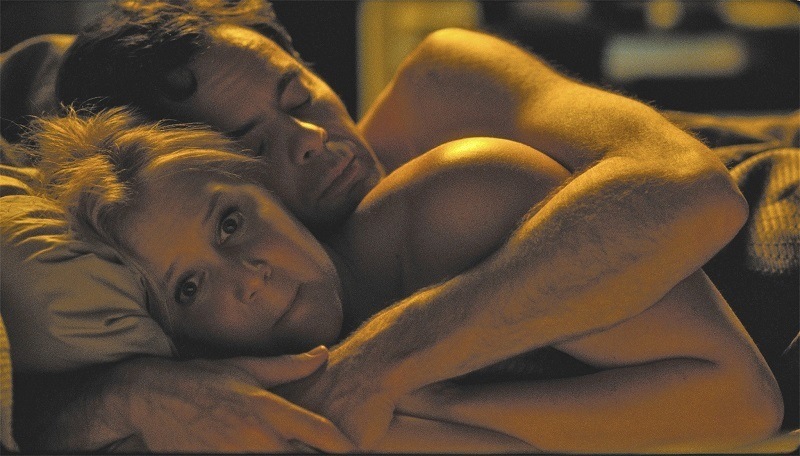 So ‘liking’ something is such an ambiguous term. If you judge quality on originality and innovation, some of your least favorite movies of the year might be some of the best, but if you judge it on the strength of emotional reaction alone, some of your favorite movies might be the worst. I tend to rely on what the movie provokes in me emotionally, so I end up with the suspense of “Sicario” and the tear-jerking “Brooklyn” high above the slightly clinical, understated “Carol,” though there was a lot I loved about that movie.

Same goes for “Clouds of Sils Maria,” which has a duo of great performances and so many thought-provoking ideas but failed to elicit more than vague interest for me. Having heard about the plot beforehand, I thought the movie would resemble Bergman’s “Persona” or Aronofsky’s “Black Swan,” two movies that had the emotional punch of psychological horror. Instead, though, it was more patient and exploratory in its themes. It felt like a movie adaptation of a classic work of literature; I’m sure somebody could write a whole book analyzing the movie, but I would’ve traded that for a bit more of an emotional connection. I wasn’t wholly uninvolved while watching the movie—I’d still give it a solid B. Aside from the thematic exploration, it was fascinating just to watch Maria (Juliette Binoche) and Valentine (a subtle and great Kristen Stewart) converse. There were some really enjoyable scenes of the two bonding. I especially like the conversation at the bar about superheroes; the silly fantasy movie they were watching was way too on-the-nose and unrealistic, sure, but the conversation has a lot of smart things to say about big-budget fantasy blockbusters versus the high-brow psychologically based theatre that Maria dedicates her life to. I couldn’t help but cheer when Valentine defended teen actress Jo-Ann (Chloë Moretz). There’s something nuanced and interesting about the conversation—Maria is clearly a bit condescending in the way she dismisses the teen fantasy genre, and in the way she laughs off Valentine’s defending of Jo-Ann, but it never escalates into an all-out fight, only a healthy debate. You can see how comfortable the characters are with each other, and their unique dynamic kept me intrigued the whole time. Besides, Jo-Ann is an interesting character in her own right, though her subplots don’t quite fit in perfectly with everything else going on.

I guess part of my slight disengagement came from my confusion; though I knew there was so much buried commentary in the movie about identity and art’s relationship with reality, I wasn’t sure what the main conclusion to draw was. The final outcome of Valentine imitating the end of the Maloja Snake (the play she’s helping Maria rehearse for) is the logical endpoint for the character based on the theme of life imitating art, but I thought the conclusion would be a bit more tragic and disturbing instead of haunting in an understated way. Then again, maybe the movie’s ideas would be buried in melodrama if it became truly horrifying.

All of this is to say that I had no idea where to place “Clouds of Sils Maria” on my list. It currently sits at #31, which feels so wrong when you compare it to #27 “Unfriended,” #26 “Ant-Man,” and, again, “Kingsman” and “Trainwreck.” And yet each of those movies entertained me more, and elicited more immediate emotions from me. Their ideas aren’t as sophisticated, their writing isn’t as meaningful, and their characters aren’t nearly as complex. But I liked them more.