Over the summer, I had the pleasure to explore a lot of great new music. Amongst them was an experimental pop indie band named Animal Collective. They’re quite popular in the indie scene, but I had never heard any of their music before. Their albums Strawberry Jam and Merriweather Post Pavilion are considered “essential” within the indie community.

Animal Collective has a very distinct sound that places them within a niche that I don’t think many other bands could fall under. The closest I can think of might be Neutral Milk Hotel (of memedom fame). First listening to AnCo, and Avey Tare’s + Panda Bear’s unique vocal performances, has been described “like having ice water splashed on your face,” and I couldn’t agree more. They’re a great band for expanding your “listening range” of music, if you want to call it that.

I don’t think it’s easy to see why “Fireworks,” the first single on Strawberry Jam, might be genius – I certainly didn’t get it the first few listens. The melody is kind of catchy, but the brash nature of the song is off-putting and too busy on the ears. However, having given the track a more in-depth listen, I’d like to break down my own opinion on why this is perhaps Animal Collective’s most beloved song.

The album cover gives us a good first hint on what kind of tone AnCo is going for on Strawberry Jam (and “Fireworks”). 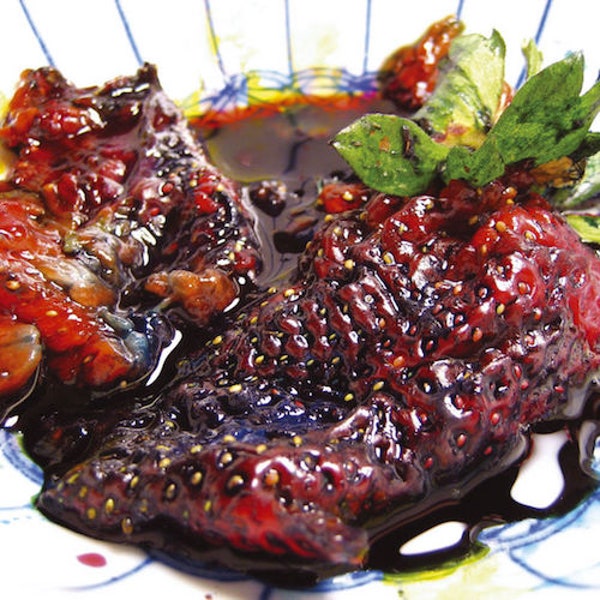 Context for this photo is provided by Panda Bear, the band’s main drummer, in which he wanted the production of the album to sound like how the jam looked, “that is to say, something that’s really synthetic and sharp and futuristic looking,” but also “tangy and sweet, almost in a kind of aggressive way in terms of the way it tastes”. I think they pretty much hit this idea on the money.

The jam in the photo is messy and sticky and melted, saccharine in taste and likely cooked in some mid-summer afternoon. It’s a deep dark red, blood-like in color, perhaps providing as the bridge between the physical properties of the picture and the very physical feelings that it evokes – which, to me, is a Midwestern summer Michigan-y feeling of sweat and heat and the malaise of suburban life, or to put it experientially, like walking back home after a long night, mouth dry and eyes squinting. It’s hard to translate this into concrete emotional terms. Not pleasant. Lonely. Like a post-breakup hangover.

Texturally, “Fireworks” is pretty rough – not only is the underlying drum repetition grainy and punchy, Tare’s vocals are strong, yelpy at times, and certainly not the kind of pitch-perfect singing quality you’d hear on a radio hit. You could get a “better” vocal performance from any of the ten-year-olds on America’s Got Talent. But unlike the scripted stage of viral-video public television, you can tell Tare’s throwing his weight and soul into his words, as if, at times, he literally can’t contain the emotion he feels anymore. Just listen to how he sings the climax of the chorus –

“And I can’t lift you up, cause my mind is tired
It’s family beaches that I desire
Sacred nights where we watch the fireworks
They frighten the babies and you know
They’ve got two!
Flashing eyes and if they’re color blind
They make me feel
That you’re only what I see sometimes.”

I feel that it’s hard not to be moved by how strongly Tare tears open his heart. That final line in the chorus, “that you’re only what I see sometimes,” is delivered with so much conviction it’s almost childlike. And I think that might be what makes Animal Collective such a popular band. In an age of radio-pop and rap focused on experience too simple or too far-removed, Animal Collective comes across as both refreshingly relatable and catchy, and expresses this fundamental, tired, and uncomfortable feeling of missing someone close to you in such a cohesive manner, from album cover to production quality to vocal performance to lyricism, that it’s really a cathartic joy to listen to, as well as an artistic triumph. At its core, “Fireworks” manages to convey a primal emotional stew of love and want and sadness – that abstract feeling of suburban heat, sunburned and sticky and gross, alone, watching the fireworks.