This Saturday at 10 pm catch a one-night only showing of Rocky Horror Picture Show featuring a shadowcast performance by the Leather Medusas! This cult classic will not disappoint as the audience shouts, dances, and throws things all over the theater. To give a summary or a sneak peak into what to expect of the movie would be a grand disservice to those uninitiated, so grab an $8.50 student ticket and let’s do the time warp again!

It’s highly encouraged to dress up, if not as a character then as taboo as possible. Follow the cues of the crowd and PLEASE don’t be the Rocky Virgin that comes with the call out script memorized. Just come and let it happen (and don’t forget red lipstick).

If it’s any indication of the kind of fun that will be going on Saturday, here’s a list of banned props for the evening: The Lehman Trilogy consists of three men, a box, and a piano. From these elements emerges a case study of temporality, American capitalism, and what it means–and costs– to succeed.
At the core of the play is a business. It’s hard to label it as anything more than a business, because as the institution founded by the Lehman brothers changes hands, generations, and locations, it morphs from a simple fabrics store to a convoluted financial empire. This progression is slowed, stopped, and aided as history progresses and events like the Civil War and the Great Depression happen.
The audience watches a century and a half unfold in front of them thanks to a tight script, focused acting, and a clear historic backbone. Without brilliant performances alternating between expositional narration and multiple characters, the narrative would be totally lost. The bare-bones costumes and props further highlight the skill of these actors in how they construct multiple times and places.
Looking at the specific presentational elements of theatre, the construction of this play is pretty impressive. The set, an ever-present rotating glass box, mimics the march of time and the contained, capital-focused world. While we watch sons turn to fathers and fathers turn into moguls, the piano accompaniment plays what feels to be a fourth character, layering interactions with humanity and punctuating sequences with intensity, tragedy, or humor. A changing background screen aids the geographic and tonal shifts without being too flashy or distracting.
I did find some issues with the closure of the work, however. As the play ends with the 2008 financial crisis, the last scene has a sense of helplessness in the face of the Great Recession. This felt a little bit off-base in terms of the structure of the narrative. The play details the highs and lows of business as history affects the Lehman brothers and their business, maintaining a strong sense of continuity. Even through the Great Depression, despite its highly destructive effects, the play shows the eventual turning of the tides that leads to more success. The play doesn’t treat this next trial as a closing element to the narrative but it doesn’t clarify it as a part of the established continuation of effort of the company. If, say, the play hinted that the 2008 crisis would bring about the absolute demise of the company, it would be a much more satisfying ending. We as an audience would have claimed witness to the entirety of the lifespan of the company but instead we see the actors praying to survive and the premonition of a phone call closing it out. There’s no finality, something I would have accepted in the form of a clearer end to the Lehman narrative or in a statement on the vitality and perseverance in their work.
Ultimately, The Lehman Trilogy was an engaging approach to the traditional constraints of narrative timeline, limited actors, and staging found in theatre. Outside of some aspects of closure, it was highly enjoyable and a great way to spend a Sunday night. 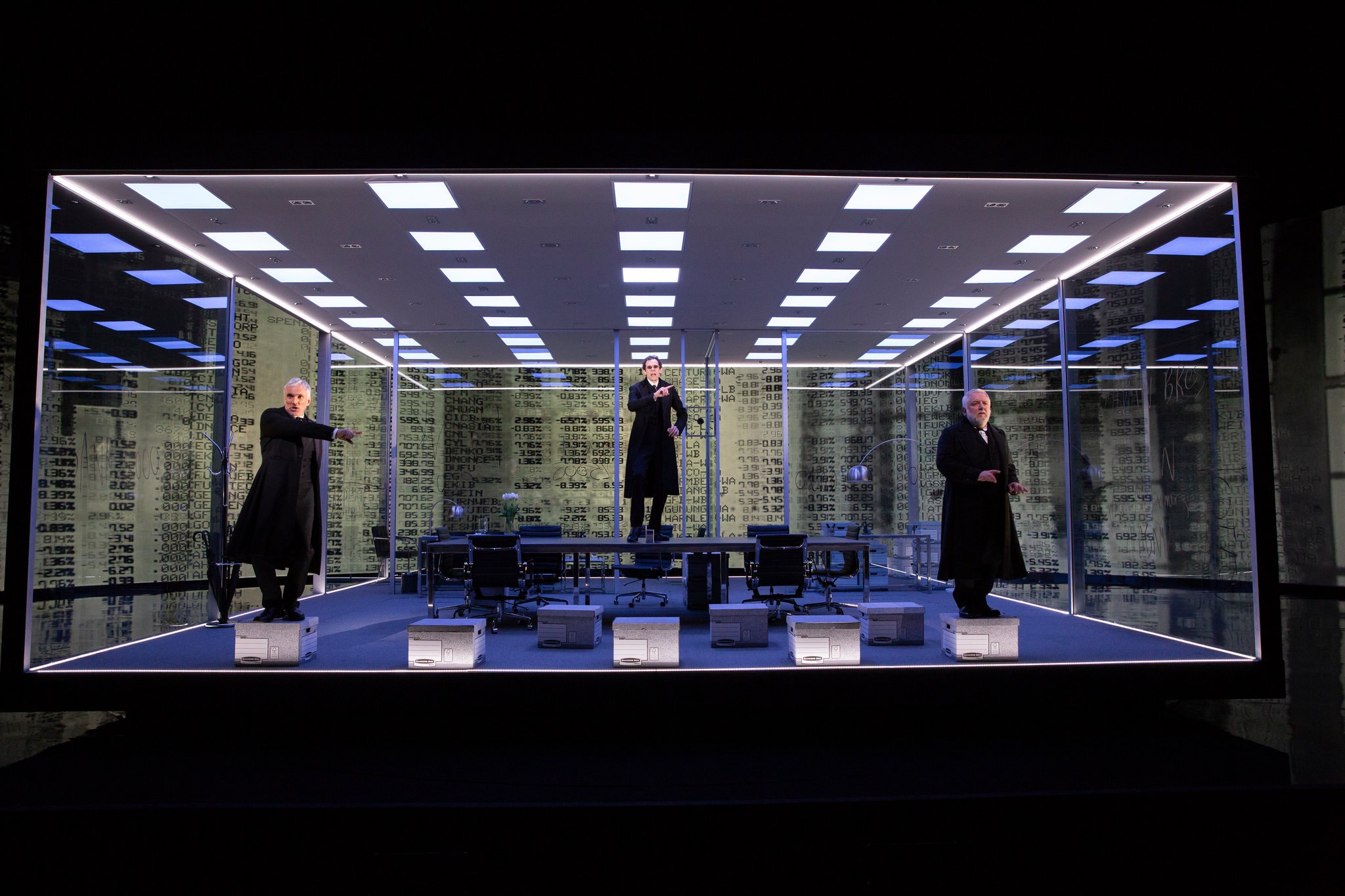 Catch a one-night only broadcast of National Theater Live’s Lehman Brothers Trilogy this Sunday, October 13th at 7 pm at the Michigan Theater! Detailing 164 years of American capitalism amounting to the 2008 market crash using only three actors, Italian playwright Stefano Massini’s work is sure to not only be a thought-provoking performance, but an impressive one at that.

Take a break from studying this weekend, find tickets online at https://www.michtheater.org/show/nt-live-the-lehman-trilogy/ , and come out to see some great theatre!